The Australian Performing Arts Market (APAM) occurs once every two years. In previous years, APAM has occurred in Adelaide – usually at around the same time as the Adelaide Festival. But this year, over 600 delegates representing 31 countries came to Brisbane to attend APAM 2014. The delegates attend showcases and hear pitches from 52 Australian and New Zealand companies and artists looking for partners, collaborators and investors to tour their performing arts works. Claire Marshall’s SlowDive was one of these lucky works to be selected to be presented at APAM this year.

SlowDive was presented in club format at the Brisbane Powerhouse. APAM runs over 4 days and is closed to the general public unless you have a spare $790 to part with to attend. It’s a pretty big deal!

SlowDive was originally developed in 2009 as at the Judith Wright Centre Shop Front as a 30 minute work called Hey Scenester.

The work is about nightclubs and takes the audience on a downward spiral into night club culture. Claire drew inspiration from one of her part time jobs as a hobby DJ at Ric’s in Fortitude Valley where she DJ’d for 3 years every Saturday fortnight (2007, 2008, 2009). There was a lot to observe from the DJ booth looking down onto the dance floor, and many of these concepts were tied into the show. There’s some funny moments, but the work for is for a 16+ years audience only, as it touches on some serious issues and adult content.

After the success of Hey Scenester, Claire continued to develop the work and took it to the Brisbane Powerhouse in January 2010. Later in the year, with some financial support from Arts Qld, Claire was able to redevelop the work further and it had an 8 season run at the Brisbane Powerhouse in December 2010. The re-vamped work was called SlowDive, and it had a fantastic response in Brisbane.

Form here Claire took the show to the Arts Centre Gold Coast where it was tweaked for Gold Coast audiences and called Cavill Ave. Then in August 2011, it was presented at the Cairns Festival in the Attic Night Club. http://vimeo.com/54220009

2.5 years since  it’s last season in Cairns, SlowDive was remounted for it’s biggest and most important performance yet – for APAM 2014!

Rehearsals for SlowDive were held at Mill Street Studios for two weeks where the work was remounted.

The show set got a revamp. Technical coordinator and lighting designer Simon Cook adds LED lights to the pool table: 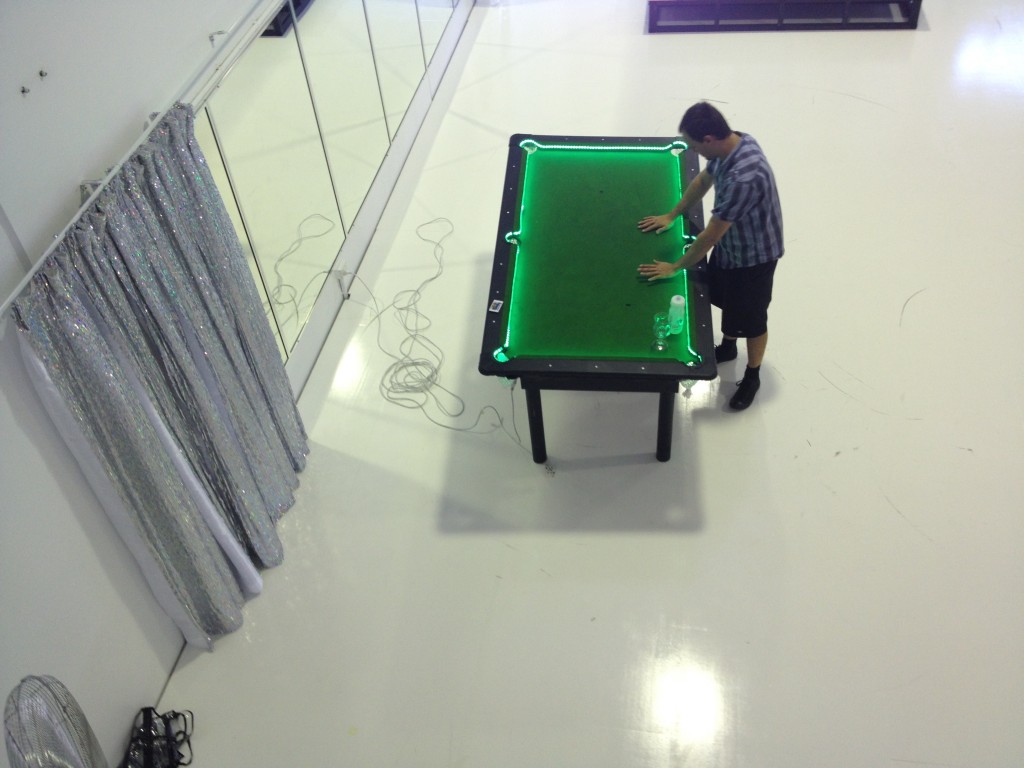 It was exciting to rehearse at Mill Street Studios. Rehearsals occurred between 9:30am and 4:30pm week days and on Sundays in  February.  The entire space was used for rehearsals including the black space, the white space and the checkered space, and foyer space.

Here’s some grabs from dress rehearsal on Thursday the 20th of February. Some of the year 11 Dance4300 School of Dance students were permitted to attend the dress run and this was followed up with discussion after the showing. 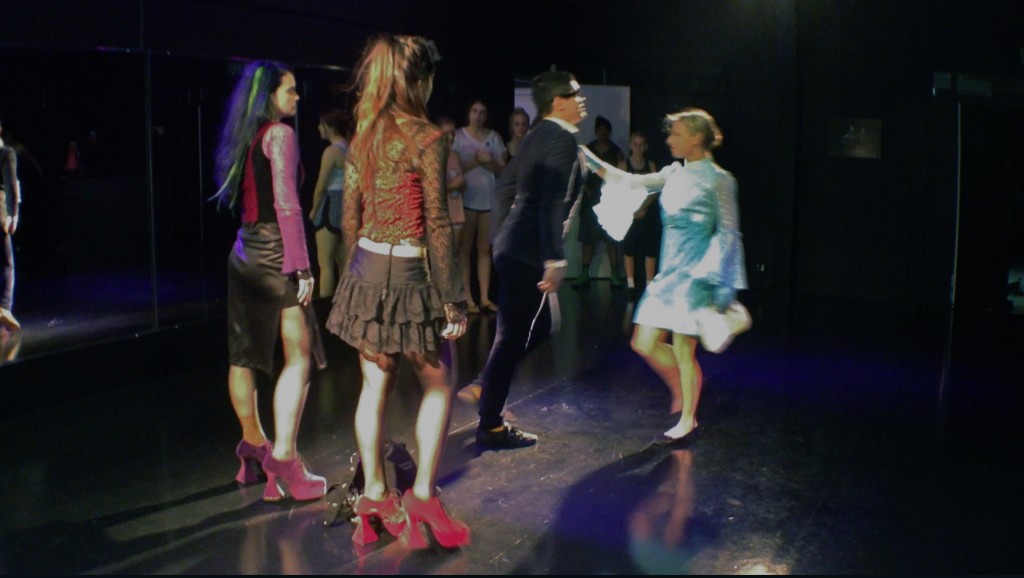 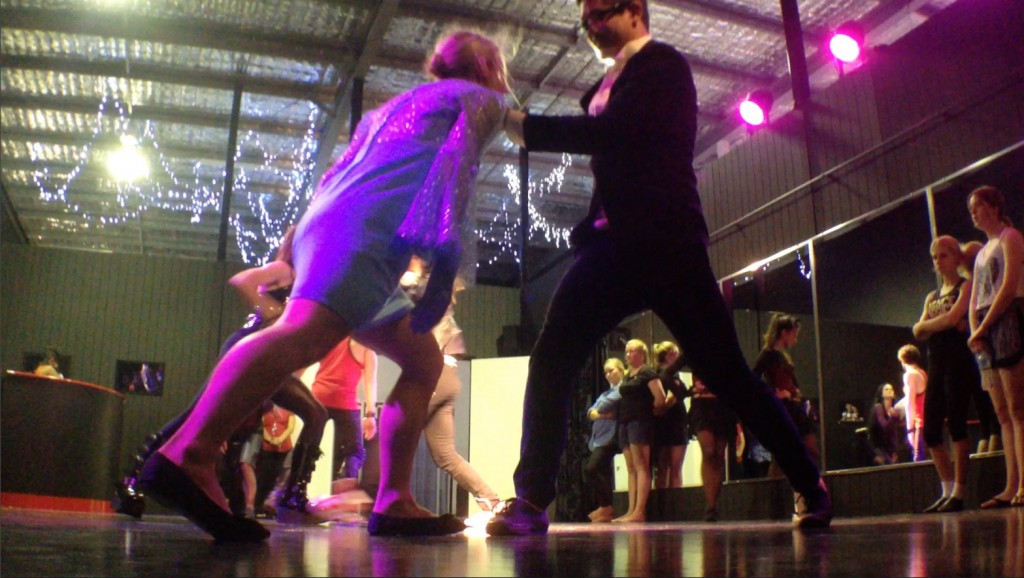 Rehearsing at Mill Street Studios meant that the set could be used and the work could be blocked out to the scale of the performance space.

The APAM performance space at the Brisbane Powerhouse was essentially a large corporate tent that we transformed to resemble a night club space. The tent is where works were pitched during the day, but the idea for SlwoDive was that the APAM delegates see the space transformed into a night club for the final night of APAM.

Bump in to the tent at the Brisbane Powerhouse occurred at 8am on Friday the 21st of February. There was only 12 hours to transform the space according to the above plans.

About 11am on Friday morning: 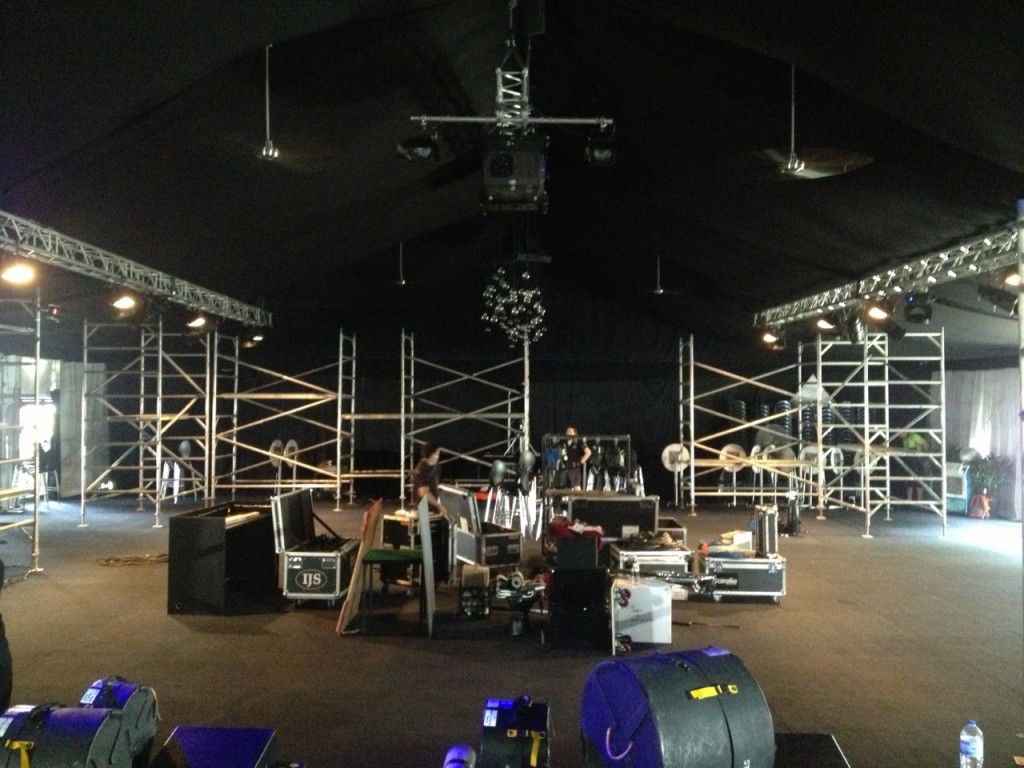 For Claire, it was an incredible experience to remount  SlowDive at Mill Street Studios.